About The Sierra Nevada & Las Alpujarras

Sierra Nevada represents the highest massif in Europe after the Alps, with Mulhacen at 3482m is the highest peak in the Iberian peninsular. The highest peaks can remain snow capped for the much of the year which is unusual seeing as its only 33km from the Mediterranean coast.  The Sierra Nevada, designated Andalucia's second national park in 1999 after Donana. Extends over a range of 2000km2, through the regions of Granada and Almeria.

The climate is classified as Mediterranean, due to a dry period of about two months during the summer but also due to the gain in altitude and the southerly and northerly aspects several mico-climates can be found in the region. These micro climates coupled with altitude and the complex geological history lead to the formation of many different ecosystems and wildlife habitats.

The stunning botanical biodiversity of the Sierra Nevada which boasts over 2000 species of plant of which over 80 are exlcusive endemic species and over 300 endemic to the Iberian peninsular. Further to this the Sierra Nevada has over 100 endemic species of fauna. Moreover, the isolation of surrounding ecosystems there are undoubtley more species yet to be discovered.
Las Alpujarras

This is the region which falls between the Sierra Nevada and Contaviesa mountain range. It is the long valley running East to West and all is tributaries  running from the North or the South into the Rio Gualdelfeo.

The Alpujarras has vast historical background, with it being the place of the Moors last stand in Spain. It holds a wondrous landscape filled with white washed villages clinging to the sides of the Sierra Nevada valleys. Moorish legacy still lasts here and can be seen in the terraced landscape and in the architecture, we also find it in the local cuisine.

The cultural interest of the region lies in its fifty-odd villages, which were the last stronghold of the Spanish Muslims, or Moors. Soon after the Castilians took Granada in 1492, all the city´s Moors were forced to convert to Christianity. Those who refused took to the hills, settling in this remote, inaccessible area. Constant pressure from the Christians led to a bloody uprising, the morisco rebellion of 1568, which was ruthlessly crushed , with the public execution of the leader, Ben Humeya, in the main square of Granada. Soon there followed a royal decree expelling from the Kingdom of Granada all people of Arab descent, since the "new Christians", as the converts were called, were all suspected of being "crypto-Muslims" in secret...The villages of the Alpujarra were resettled with some 12,000 Christian families brought by King Philip II from Galicia and Asturias in north-western Spain. However, these unique hamlets have retained their traditional Berber architecture - terraced clusters of grey-white box-shaped houses with flat clay roofs - which is still common in the Rif and Atlas mountains of Morocco

A visit to this region of Spain would not be complete without a day in the historic city of Granada and a trip to the amazing Alhambra palace. All our guided week itineraries include a free day where this cultural day out with tickets to the Alhambra can be taken for 45 euro.
We can also organise a relaxing couple of hours in the Arab baths for 40 euro or you could explore the rambling streets and bazzars of the Albacin or simply sit and enjoy the historic surroundings with a refreshing drink drink and tapas.

Most of the Alpujarras falls within the Sierra Nevada National Park, which holds almost one third of the total flora of mainland Spain and with its climate range it is not surprising. There are over 50 species of wildflower, including the sandwort and the Nevada clover, the Nevada violet and the Sierra chamomile as well as more rare varieties, including the blue gentian. Spring is one of the best times to come walking in the Las Alpujarras if you have an interest in wildflowers. There is also a fantastic array of other wildlife to be seen, most notably the Cabra Montes, the Spanish ibex, seen on rocky outcrops, which is a common occurrence and great to see on any walk.

The local specialities include freshly caught trout, beautiful goat and ewe cheeses, and with the area being so close to the Mediterranean sea, an abundance of fresh sea food. Also the dry cured hams,’jamon’, from the highest village in Spain, Trevelez, is a delicious and popular tapas.

Local wines are some of the best of the up and coming Spanish wines, with the hills of the Contraviesa covered in ‘copa’ vines. Any beer, wine or grape juice ‘mosto’ is served with excellent tapas, making each drink that little bit more special. 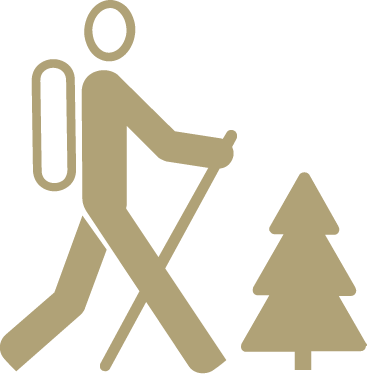 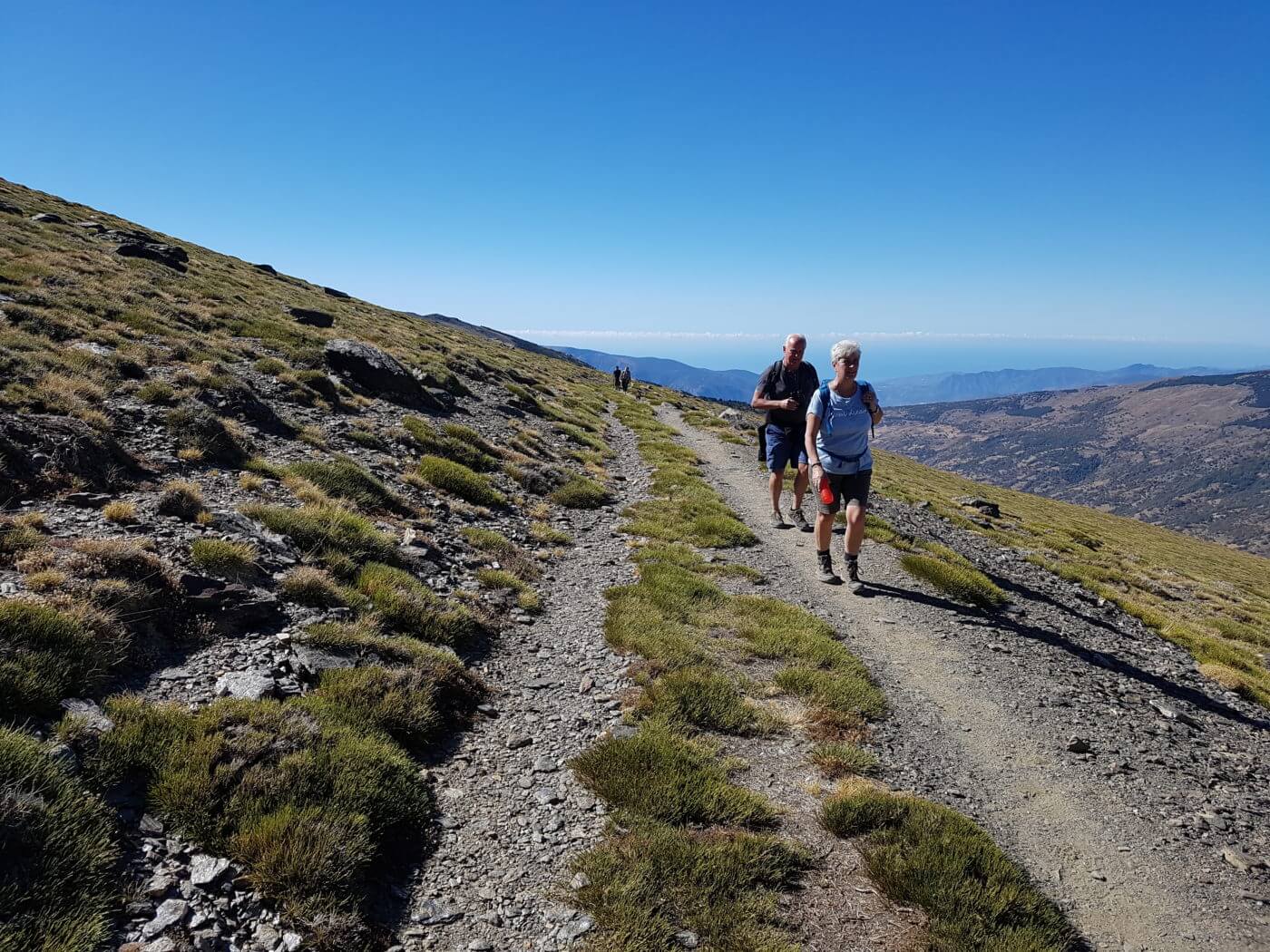 A bespoke self guided walking holiday in Andalucia, Spain , where you can choose to walk in the Sierra De Grazalema and in the Sierra Nevada, staying overnight in the beautiful cities of Ronda and Granada on the way. We ... 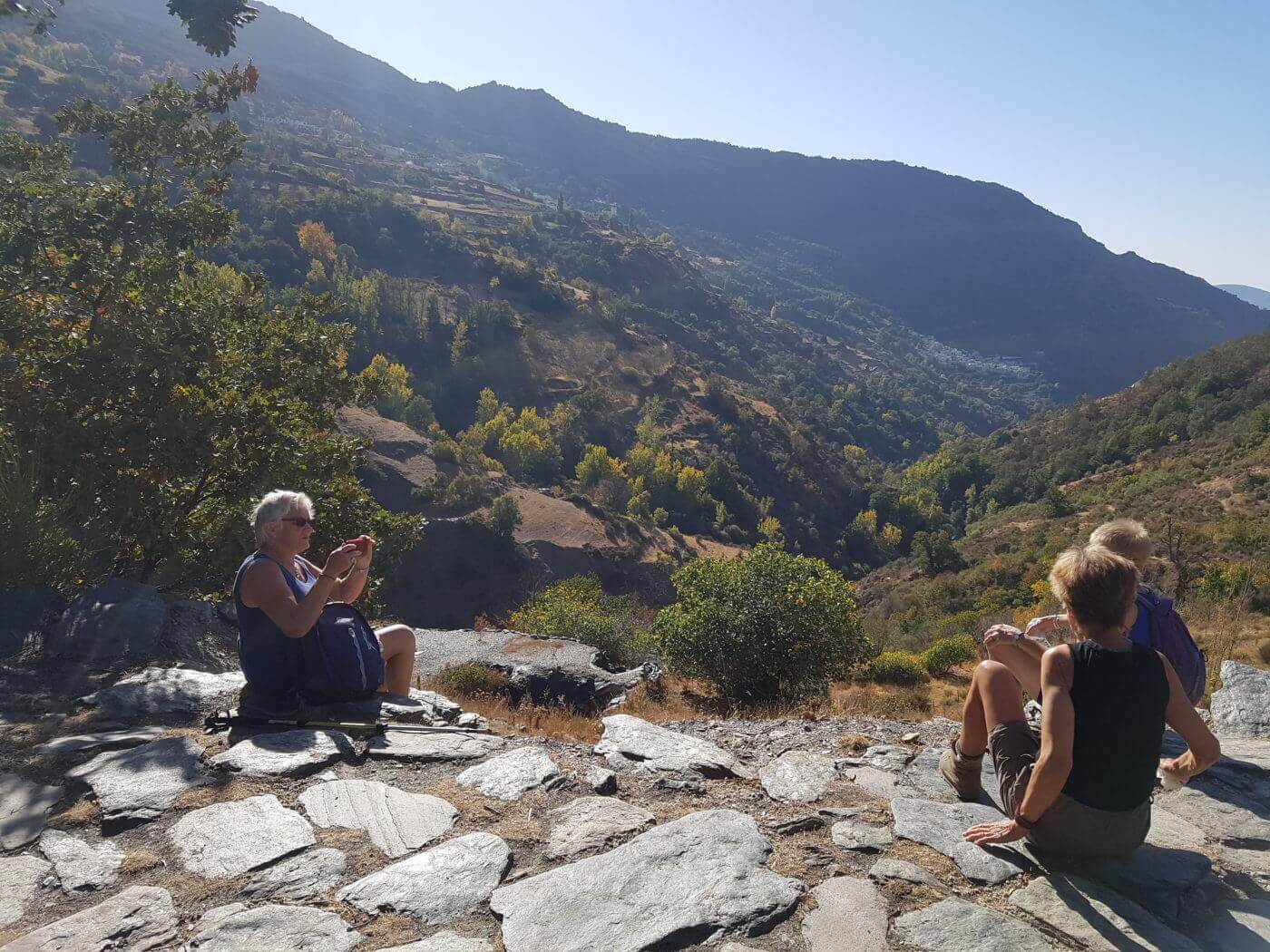 This is a three hotel guided walking holiday in the Sierra Nevada. Starting in the Poquiera gorge and making our way further east. Walking some of the classic trails along the way and walking some fabulous high ... 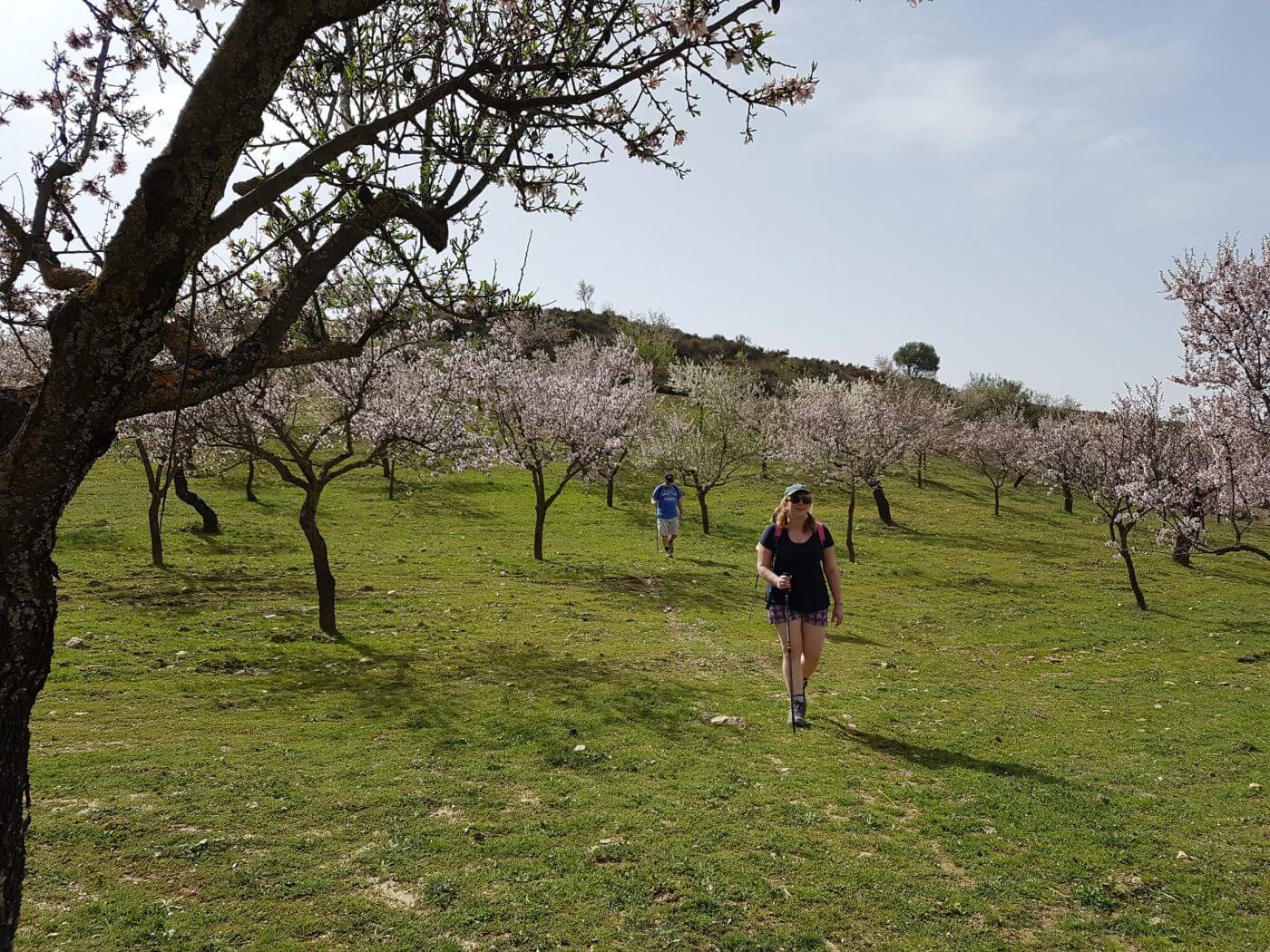 Las Alpujarras in early spring is a sight to behold. The hills are covered in purples, pinks and whites and the air is scented with the heady smell of blossom. The Sierra Nevada is still covered in snow and makes ... 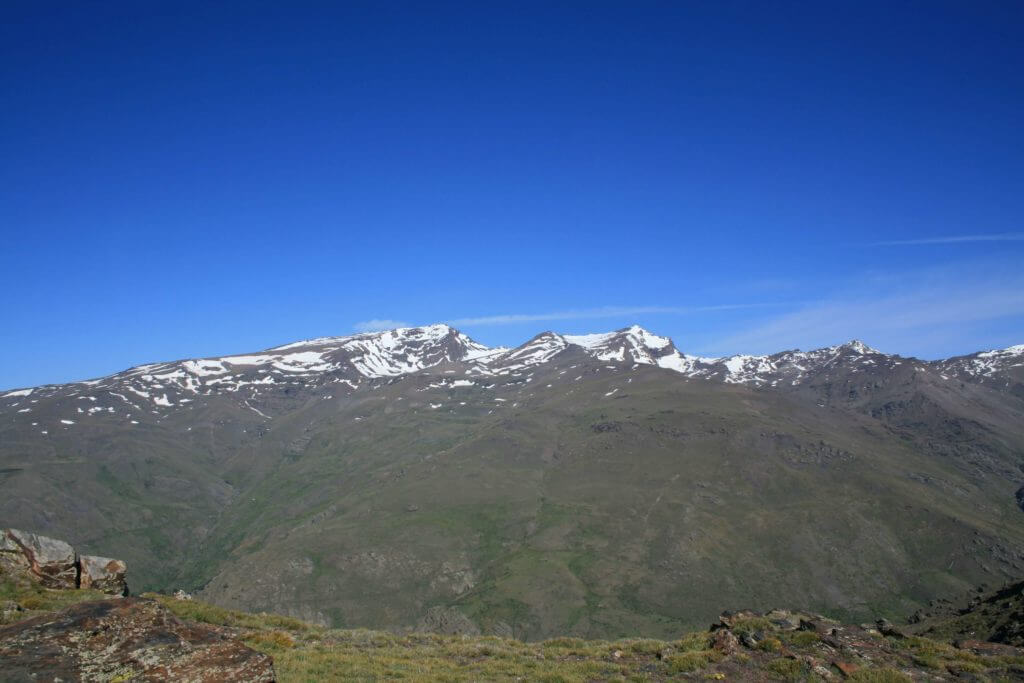 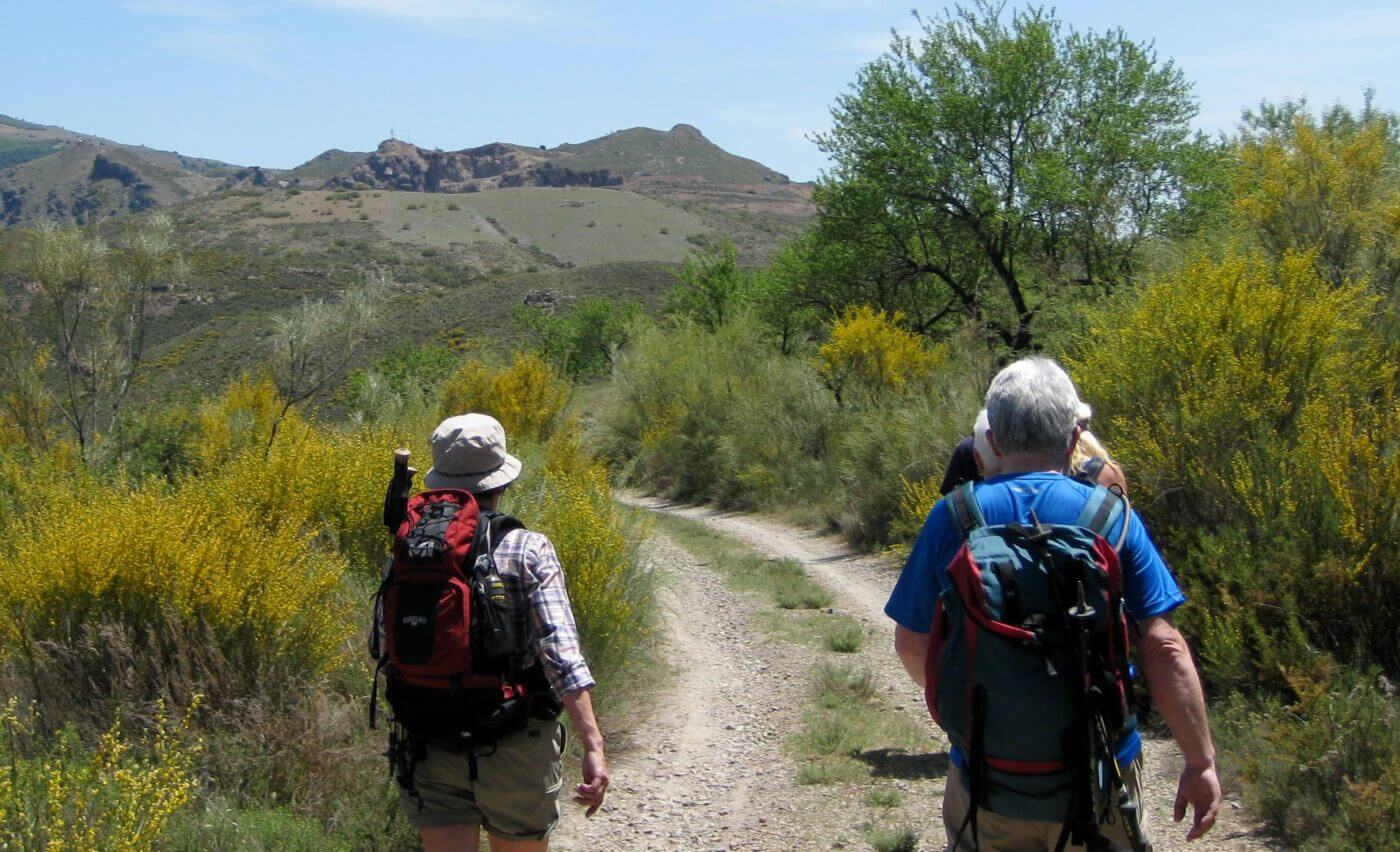 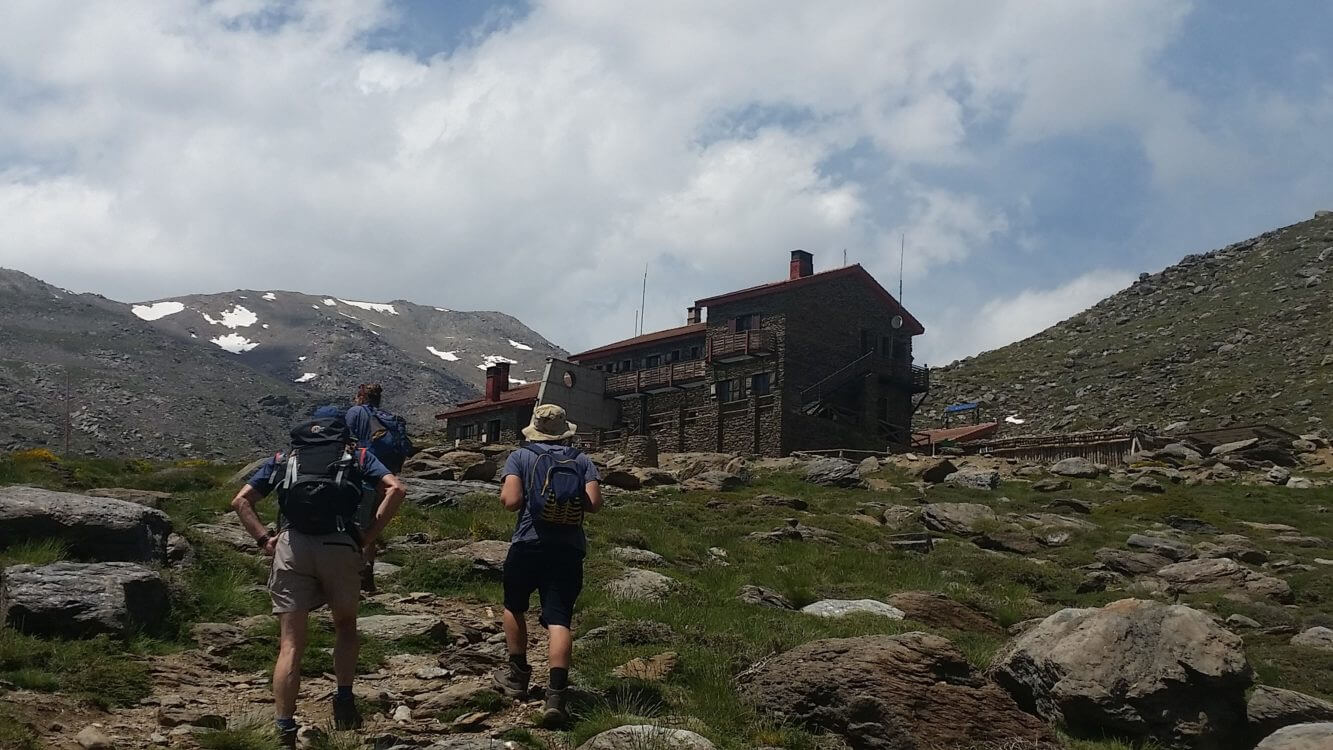 The Sierra Nevada extends through the regions of Almeria and Granada. It measures 78 km from east to west and is 30km in the west and 15km in the east. This is the highest massif in Europe after the Alps, ... 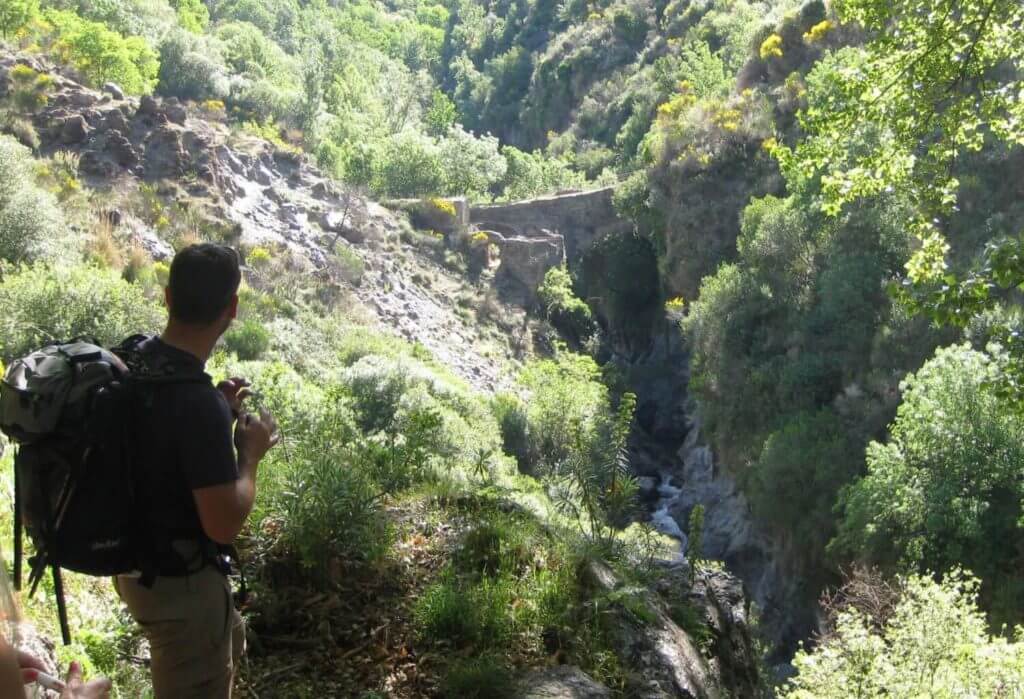 The Las Alpujarras is the area between the high Sierra Nevada and the Mediterranean Sea and is one of the most diverse regions in Spain. The Sierra Nevada dominates the rich blue skies, whilst the ... 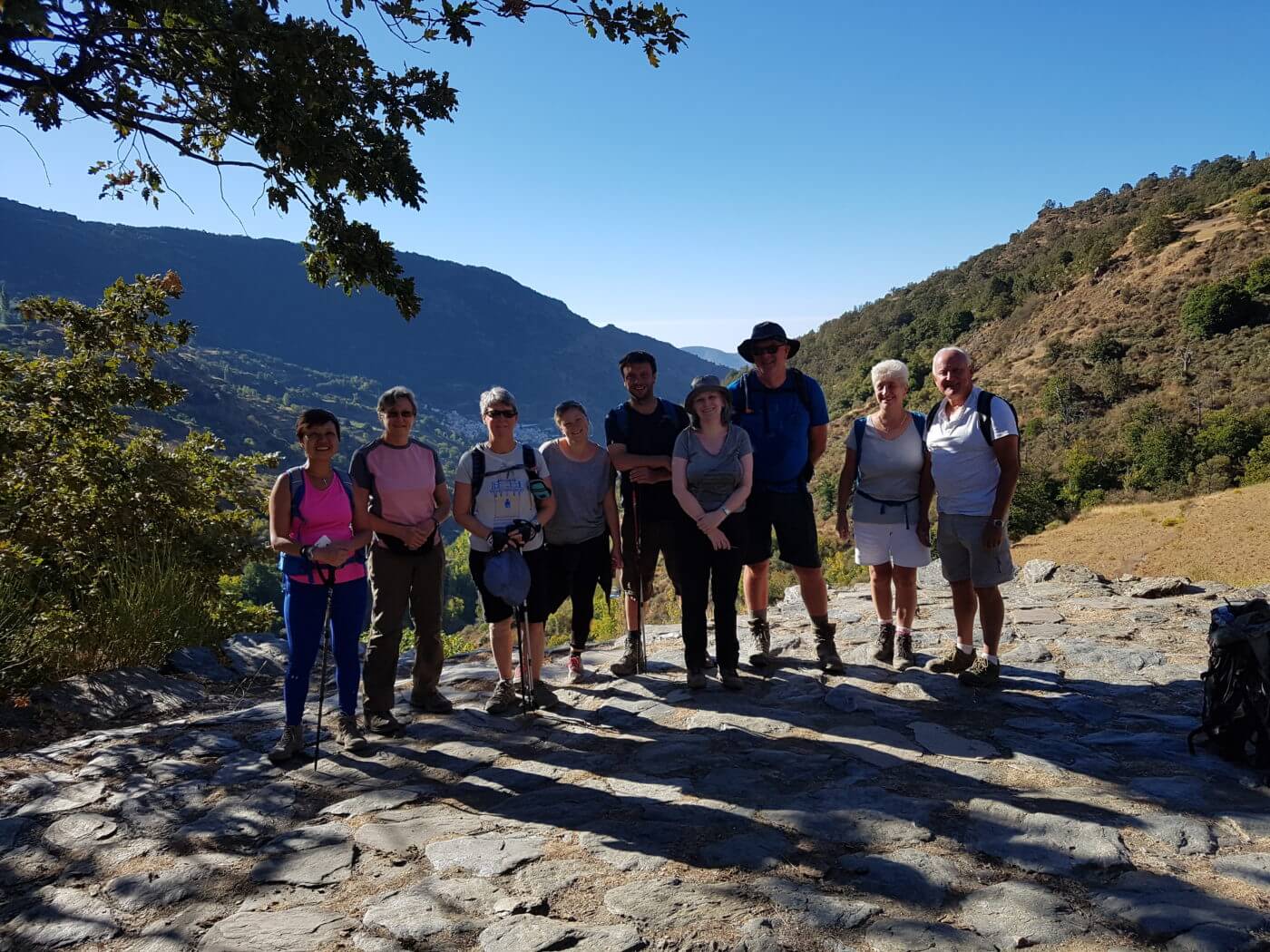 The Las Alpujarras in Andalucia, Spain is the place of the 'Moors' last stand. The whole of the national park of the Sierra Nevada is still rich with their legacy. You can see it in the architecture, the food and ... 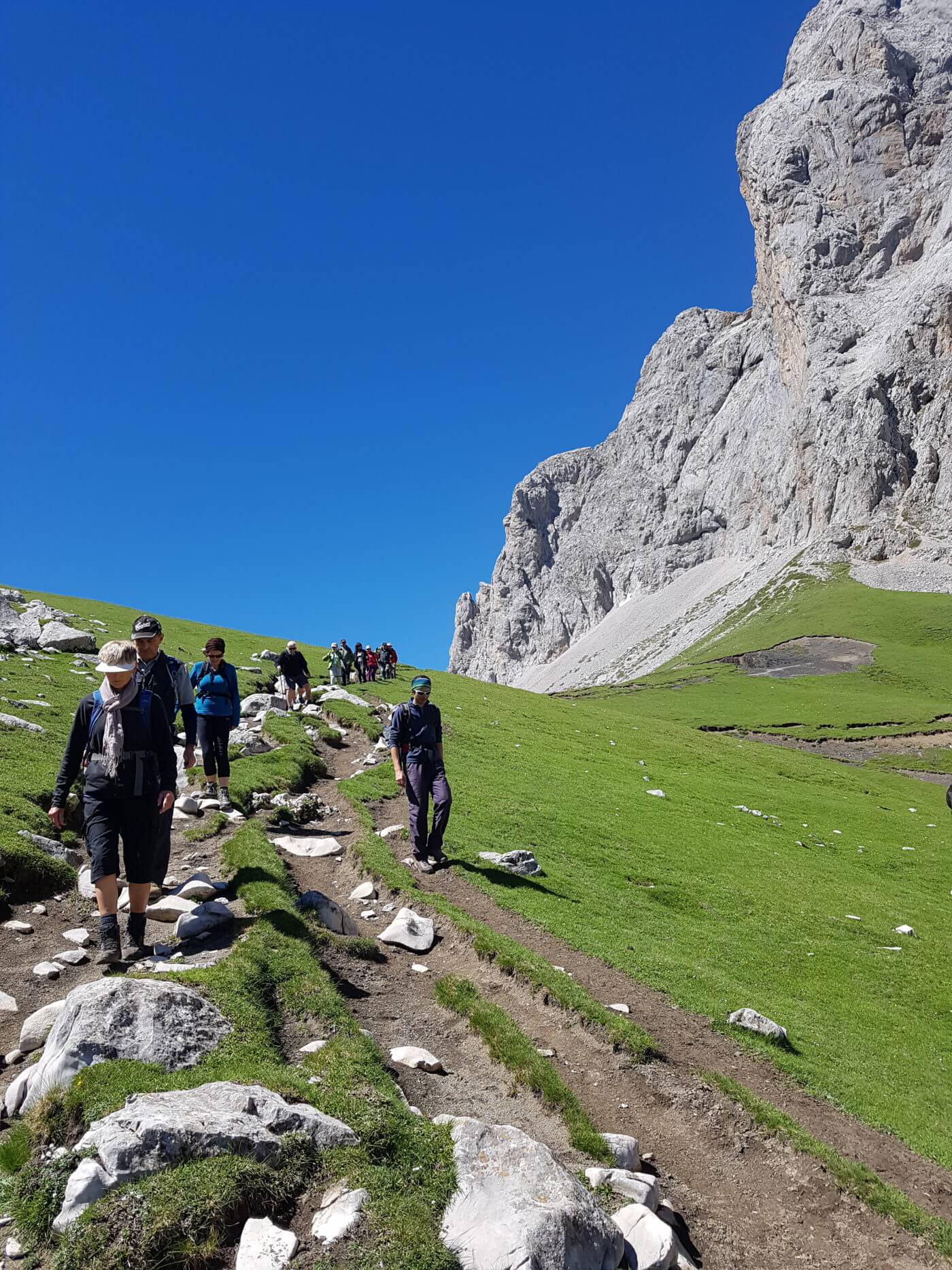